Today we’re revealing the cover for Remember Me Gone by Stacy Stokes! Lucy Miller’s family has the unique ability to remove people’s painful memories—but Lucy isn’t prepared for truths she will uncover in this speculative YA debut thriller, perfect for fans of Eternal Sunshine of the Spotless Mind. 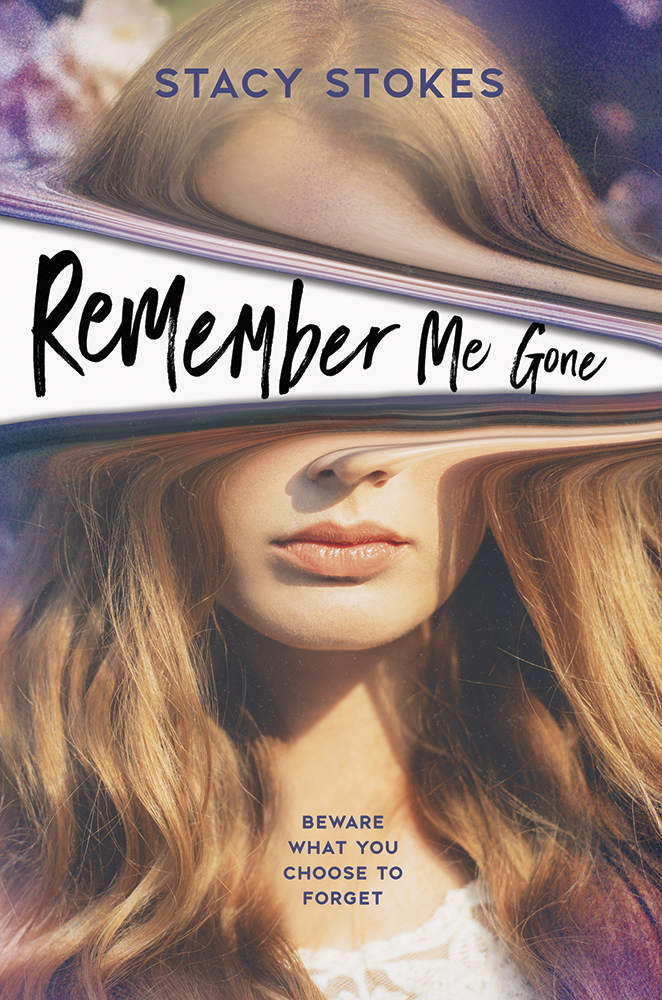 I hop off my bike and turn off the flashlight, then crouch behind one of the parked cars to get a better view out of sight. Between the lot and the mines there’s nothing but desert and dark, with clusters of yucca, beargrass, and greasewood shadowed across the dusty landscape. And beyond the mines, Mexico stretches out into a black expanse indistinguishable from the sky.

The light illuminating the opening is just bright enough that I can see a line of people lurking outside of it, like they’re waiting for something. The Mayor stands in front of them, flanked by my dad and two large burly-looking men. Based on the way his arms are flapping around him, it looks like the mayor is giving a speech.

I creep closer, past the trailer, crouching low as I leave the safe covering of the parked cars and enter the dark section of desert that leads to the mines. On a normal evening, the path would be brightly lit and buzzing with activity, with trucks weaving to and from the mines carrying the day’s quarry. But given the late hour, the space feels vast. Almost ominous. When I’m close enough to hear some of what’s being said, I duck behind a large jumble of plants. The trailer is less than a dozen yards behind me, but I’m far enough in the shadows that the light from the window can’t quite reach me. And I’m counting on my dark clothes and the barely there moon to help me stay hidden.

The mayor’s still wearing his sunglasses. The lights illuminating the craggy mine opening cast shadows across the spectators’ faces, so it’s hard to make out their exact expressions. But if I didn’t know better, I’d say they look scared.

“ . . . efforts won’t go unrewarded.” The mayor lifts the bill of his hat and wipes at his forehead. “This is purely a precaution.”

He motions to the large men standing next to him just as they both step forward. That’s when I notice they’re carrying guns. Big ones braced with black leather shoulder straps, like they’re about to march into battle.

As if choreographed, the two men simultaneously lift the barrels and point them toward the line of people. One man ducks. Some folks jump back, hands held out protectively in front of them. Others cry out or cover their faces, like their palms might provide a strong enough barrier between them and the weapons. I gasp, then crouch lower behind the plant in case someone heard me. My hands are trembling so hard I drop the flashlight, sending a cloud of dust into the air as it rolls away. What the hell is going on?

“No need to panic,” the mayor explains. “Just do as you’re asked, and no one’ll get hurt. Understand? Again, this is just a precaution.” Then he turns to another man standing there, off to the side—

The mayor looks at him expectantly and Dad shuffles forward, shoulders slumped, fingers working the crease in his brow. Then without a word, he grabs the hands of the first man in line. Dad’s back is to me, but I don’t need to see his face to know what he’s saying to the terrified-looking man.

Tell me what you want to forget.

But no. That can’t be right. It doesn’t look like this man wants to forget anything.

A second later the man’s mouth goes slack, and he sways a little in Dad’s grip.

My heart is a rabbit inside my chest. Dad still cuts the crusts off his peanut butter and jelly sandwiches. He goes to bed before ten, even on Saturdays, and once grounded me for saying the word hell. He’s not the kind of man who hangs out with armed men in the middle of the night. And he’s certainly not the kind of man who takes people’s memories without their permission.

I turn, ready to hop on my bike and ride back to the house as fast as I can, but I run smack into someone’s chest.

A hand clamps over my mouth before I can even scream.

Did you miss the cover reveal for Nina LaCour’s Watch Over Me paperback? Check it out here!