Cover reveal time! Scroll down to see the cover and read an excerpt of The Diamond Keeper, a thrilling tale of the elusive Hope Diamond’s journey across Europe during the French Revolution. 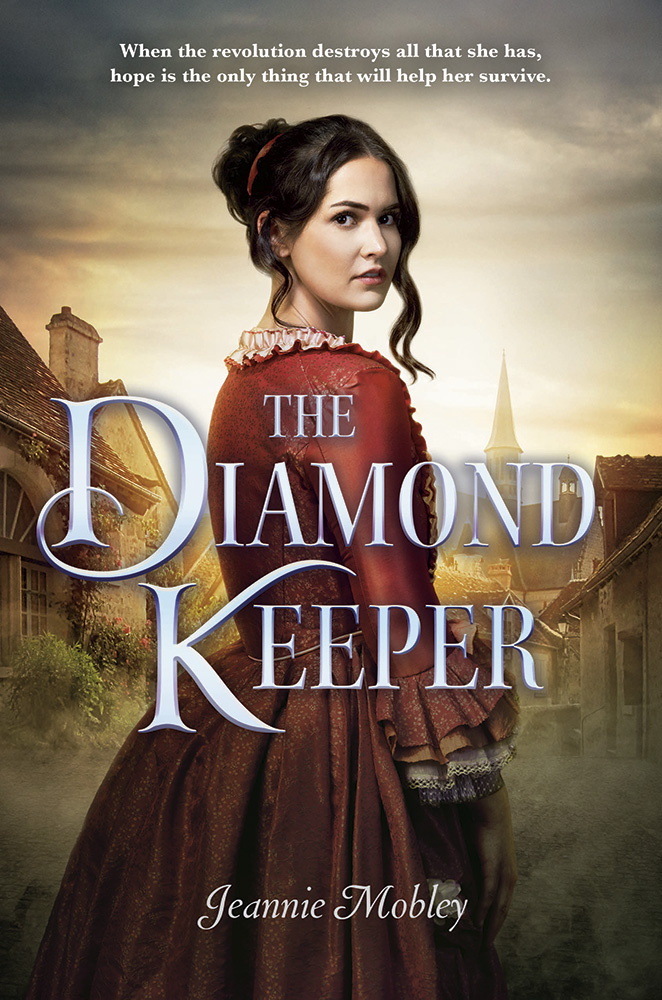 “So, you’ve decided to marry Pierre after all,” I said.

Mathilde rolled her eyes. “Just because I let him flirt doesn’t mean I’m going to marry him. Honestly, Claudie, you should try flirting a little more yourself. It makes the work far more pleasant.”

I bristled, as she knew I would. She pretended to ignore my reaction. Nonchalant, she picked up a chicken wing and pick daintily at the meat with her teeth.

“But you are going to marry him,” I said. “I heard Papa and old Reynard. It’s all arranged.”

Mathilde gave a little shrug and went on eating. “Let them make their plans. It has nothing to do with me. I’m going to marry Jacques Lambert.”

“Let him. Jacques doesn’t care about dowry. We will be traveling, and a bag of coins would only slow us down.”

“You and Jacques might not care about your dowry, but Papa does. Once he signs it over to the butcher, he will force you to marry. You won’t have a choice.”

Mathilde actually giggled at that. She licked the greasy sauce from her fingers, then leaned across the table to give me a kiss on the cheek.

“Good little Claudie. Has it ever in your life occurred to you not to do what Papa says you must? It’s a whole new world out there. The king overthrown, the rights of man declared, and still, all you can imagine is the life of obedience to a father who’s never cared one whit about you?”

I opened my mouth to argue, but was interrupted by the clanging alarm of the church bell.

Mathilde and I stared at each other as the clamor rose louder, my mouth still open but empty of words.

The common room grew momentarily quiet, too. Then there was a scramble, as men grabbed their hats and hurried outside.

The warning of the man on the huge horse came back into my head. Stay inside, he had said, but of course, my bold, impetuous sister was out the door in an instant, and I chased after, determined to keep her safe.

The street grew crowded as neighbors tumbled out of every house, many in night shirts and caps. Some already carried buckets, assuming an alarm from the church at this hour could only mean fire. Others, however, were fully dressed and booted, and carried scythes, pitchforks, and clubs. They made their way to the front of the crowd with more organization than one might expect of lowly farmers roused from their beds by an unexpected alarm.

I reached for Mathilde’s hand, afraid of losing her in the crush. That’s when I realized that she, too was working her way forward with purpose, though we were unarmed and unprepared for whatever lay ahead of us.

Bu the time we reached the square, we were near the front of the crowd. Here, torches brightened the night to full daylight. My feet faltered at the scene they illuminated.

A small troop of soldiers sat on their horses, their blue jackets crisp, their heads all adorned with red liberty caps. Each had a musket that glinted in the torchlight, and each musket was pointed at the gathering crowd. In the space between, three soldiers had dismounted and stood over our beloved priest, Père Francois, who swayed on hands and knees before them. His black cassock was torn at the shoulder and blood dripped from his nose.

“We know they came this way. A large party—the Marquis du Aubigny and his family. They are allies of the king and enemies of the revolution, escaped from their townhouse last night. Harboring them is an act of treason, punishable by death. Where are they, old man?”

My stomach turned over. I was the one harboring them—my family would be the ones punished for treason! And the beating Père Francois  was taking was my fault. He couldn’t possibly know of the fugitives I had taken in. I prayed his innocence could save him.

“I harbor no one in my church.” Père Francois spoke boldly, though his voice was slurred, as if his teeth were already broken. “But even if I did, who are you to defile the sanctuary granted by God?”

I winced at his defiant response, even as it earned him a hard kick in the ribs. He fell onto his side and curled into himself, coughing.

A cry of protest rose from the crowd, drawing the soldiers to attention, their fingers hovering on the triggers of their guns. I tried to draw back, but was trapped by the crowd.

The captain of the troop rode a pace or two forward, bringing the hooves of his horse to within a few inches of our priest’s head. Indifferent to the man’s agony, he called out to the crowd.

“Citizens, it is a crime against France to help its enemies. Someone among you harbors traitors who would flee France with the wealth of her people. If any of you know where the Marquis and his family are hidden, speak and you will be shown mercy.”

There was a silence then, a long pregnant silence, only broken by a cough from Père Francois and the clink of bridles as the horses, alert for battle, shifted. My heart was in my throat, strangling out any words I might have thought to say. What could I do? If I spoke, my family would surely be condemned, though they knew nothing of the refugees resting in our salon. I gripped Mathilde’s hand tighter and prayed the captain’s eyes would not alight on my guilty face.

“Citizens, return to your homes!” the captain called. “We will search this village from one end to the other, and when we find them—”

The captain never finished his threat. Somewhere high up and off to the left, where the apple orchards met the forested hills, a shot rang out. The captain jerked violently. His face registered shock, then he toppled from the saddle. With that, the front line of the crowd—the ones with pitchforks, scythes, and clubs—surged forward. The muskets fired in a great cloud of smoke. Women screamed. And I lost hold of Mathilde’s hand.

Excited for Shadow and Bone to drop on Netflix? Here’s what you should be reading while you wait!