Cover Reveal: THEY HATE EACH OTHER by Amanda Woody

Cover reveal! They Hate Each Other by Amanda Woody is coming to shelves in May, 2023.

Jonah and Dylan get along like oil and water. Until a fake dating ploy gives them new perspective, and they realize that “falling for your enemy” isn’t as impossible as it seems.

There are plenty of words Jonah Collins could use to describe Dylan Ramírez. “Arrogant,” “spoiled,” and “golden boy” to name a few. Likewise, Dylan thinks he has Jonah accurately labeled as an attention-seeking asshat who never shuts his filthy mouth. Their friends are convinced Jonah’s and Dylan’s disdain for one another is just thinly veiled lust—a rumor that surges like wildfire when the two wake up in one bed after homecoming. Mutually horrified, Dylan and Jonah agree to use the faux pas to their advantage by fake dating. If they can stay convincing long enough to end their “relationship” in a massive staged fight, they can prove their incompatibility to their friends once and for all. But the more time they spend together, the more their plan begins to fall apart—and the closer they come to seeing each other clearly for the first time.

I know what he’s about to say, but I still nearly dry heave when I hear it.

“I think we should kiss tonight.”

Kiss. Kiss. How can he say that with such nonchalance? Isn’t he equally as repulsed by the idea as me? “Kiss,” I repeat squeakily. “Like, with our lips.”

“No, with our dicks.” Dylan rolls his eyes. “Yes, with our lips, you freaking dork. Hanna is already seeing red flags. I know she’s going to dig deeper. So, let’s take this next step. Let’s convince them.”

I sigh forcefully, hating that he’s right, hating that I signed up for this nastiness. “When do we do it?” I grumble.

“I’m not sure. But we should be prepared so it looks natural.”

I’m not sure “expecting” it is going to make it look natural, considering I’ve never kissed anyone (and it’s him, the blight of my life).

Dylan must come to the same conclusion, because he says, “It probably shouldn’t look like our first kiss. So…” He fidgets, focusing on my collar, and the realization burns me down to my neck. “Maybe we should…”

He thrums his fingers against his knee. The air is so heavy with pressure I swear my head is going to explode. Are we actually going to do this? Right here?

There’s only one way to make this moment go faster, so I shift awkwardly until I’m leaning over the compartment between our seats. My heart is already pulsing uneasiness into my body, and when he closes the space between us, it rolls into my stomach.

“Okay, so…” I’m close enough to smell the spice of his body wash – to see each black curl on his head. How does this guy get more attractive the closer I am to him?

“So now…” He leans in, closing his eyes. His lips are three inches from mine. Two inches.

Dylan blinks at me. I blink back.

“You’ve never been kissed,” he says. There’s no emotion behind it – no surprise, or disgust, or amusement. He’s stating it as fact.

“It doesn’t matter,” I say irritably, though I’m not sure that’s true. I’m burning hot enough to set the car ablaze. I squeeze my eyes shut and lean closer, puckering up. “Come on. Lay one on me, big boy.”

I brace for the moment his mouth touches mine, glad I can’t see his knowing smirk or his dark brown eyes or his jutting collar bone above his navy blue coat.

I realize my muscles are wound tight with strain. I try doing as he says, melting the tension in my shoulders and neck. “Okay,” I say, then flinch when he smooths his thumbs over my eyebrows.

“These, too,” he says, massaging space between my crushed brows until my face is relaxed.

“How’s this?” I peek through one eye.

Dylan laughs, and the unexpected sound hits my chest like a Molotov, cooking me from the inside. He taps his index finger against my lips (I still have them puckered), then says, “Let’s leave it for now and worry about it when we’re inside.” 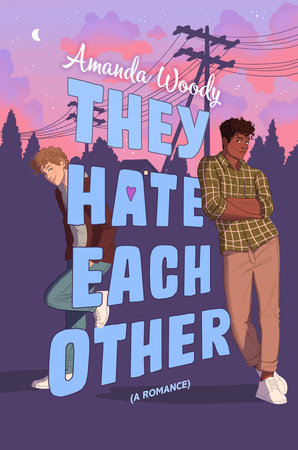 They Hate Each Other