Isaac Blum’s The Life and Crimes of Hoodie Rosen is coming to shelves this month! We asked Isaac to share his thoughts and inspirations while writing his debut about Hoodie, a boy who finds himself caught between his first love and the only world he’s ever known.

Scroll down to read, and remember to preorder your copy here!

Hi! I’m Isaac Blum, author of The Life and Crimes of Hoodie Rosen.

In the novel, Hoodie’s Orthodox Jewish community has just moved to a new, non-Jewish town, where they are not welcome. It’s no big deal to Hoodie, but then the poor dude falls for the mayor’s non-Jewish daughter, his life unravels, and he’s forced to choose between his first love and the only world he’s ever known. The book is pretty funny–is it okay to call your own book funny?–but it’s also about serious hate and bias that’s way too common.

In December of 2019 there was a shooting at a kosher grocery store in Jersey City, New Jersey. It was really upsetting. And it wasn’t an isolated incident. In the last few years there has been a sharp rise in antisemitic attacks all over the country. I hope my novel helps readers understand how that bias and hate starts and where it can lead (but in a way that’s fun and funny, because laughter can help us deal with life’s heavier stuff).

There aren’t a ton of representations of Orthodox Judaism out there, and sometimes the ones that exist show orthodox life in an exclusively negative light. I think that, with any “orthodoxy,” that highly ritualized life isn’t going to be for everybody. But I wanted to write a story that also shows the awesome stuff about observant life: meaningful traditions and supportive community. I’m excited to open a window for readers into a world they might not know, and might be surprised by.

Most teens don’t pray three times per day, and while they definitely wonder if their crush likes them back, most don’t have to worry if it’s against their religion to look at their crush on social media. So most people aren’t exactly like Hoodie, but I still think his story is one all teens can relate to. Everybody has to figure out what they believe about spirituality and the universe, and where (or if) they fit into their community. I think readers might start out saying, “This dude is nothing like me,” but end up seeing themselves reflected in Hoodie’s various internal crises.

This is a corny thing to say, but: I’m consistently inspired by teens’ ability to accept and understand each other, and each other’s differences. As with a lot of things, adults are pretty bad at cross-cultural understanding, but young adults are great at it. So I set about writing adults who let their biases blind them, and teens who work to understand each other, and heal themselves and their communities in the process. I hope my goofy novel helps people see how a little bit of mutual curiosity and understanding can go a really long way.

If you’d like to read an irreverent novel about first love, violent hatred, and tasty kosher snacks, grab a copy of The Life and Crimes of Hoodie Rosen. It comes out September 13th. 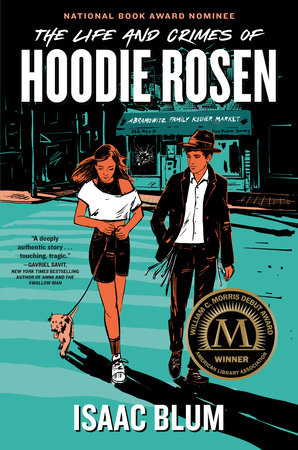 The Life and Crimes of Hoodie Rosen