See the cover for Sunny G’s Series of Rash Decisions

Cover reveal! Scroll down to see the cover and read an excerpt of Sunny G’s Series of Rash Decisions. For fans of Sandhya Menon and Adam Silvera, Navdeep Singh Dhillon’s debut is a prom-night romantic-comedy romp about a Sikh teen’s search for love and identity. 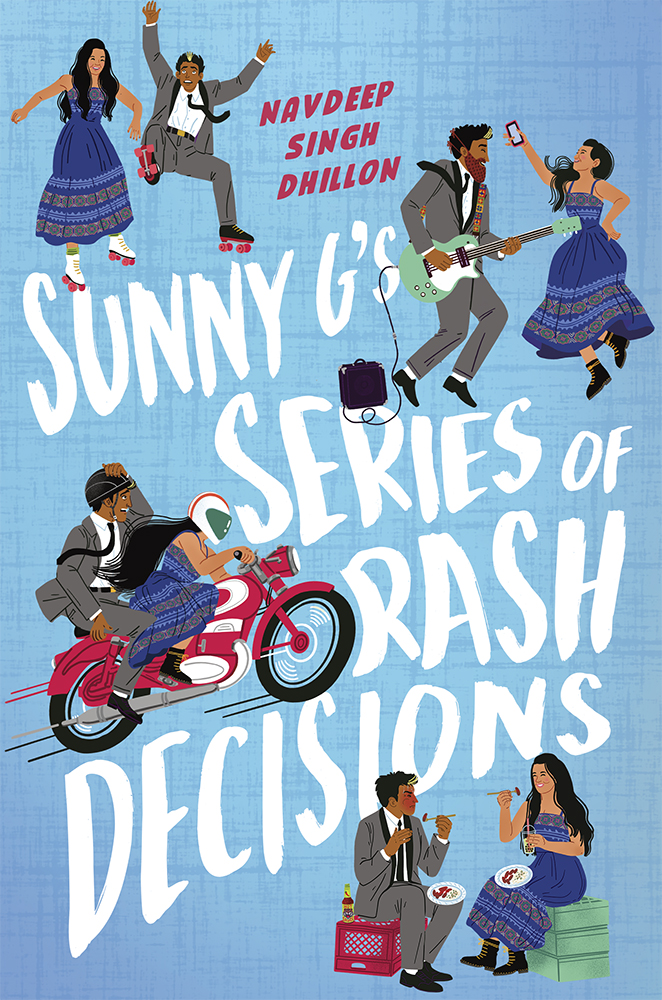 Ever look in the mirror and think to yourself: I look fantastic. My face, my nose, my eyes, the blond streak in my hair, my body, these clothes. Everything is lit.

I’m in the gender-neutral bathroom at prom, where an alarming number of people are not washing their hands. I’m staring at my phone, unable to commit to pressing the “add to story” button on this post. I hit delete and take more photos from several different angles, experimenting with various facial expressions ranging from Oh, I didn’t see you there to I am Sunny Gill Rebranded: Hear Me Roar.

It’s a little jarring looking at this new face in the mirror. I’ve been in here for eight minutes and counting, trying to regroup. I was ready to do this thing, make this my big night. Then I find Stefan sitting front and center at the table I was randomly assigned to. Of all people, it had to be him, the dude who made my life a nightmare from seventh grade on. So I bolted straight to the bathroom, and now I’m reassessing all the grooming choices I’ve made since Thursday. Including the blond streak I had added at Super Cuts, hoping for a bit of whimsy.

It’s not that I don’t like this new face. It just feels like a stranger staring back at me—the beard and turban gone, replaced by gelled-up, wavy, shoulder-length hair. My beard was never a sexy Jason-Momoa-as-Aquaman beard, or wild and dangerous like Dafydd the Feeble’s from the Jamie Snollygoster series me and Ngozi are obsessed with. Not as cool as my brother Goldy’s manicured designer dari, with the twirled-up mustache. But it was uniquely mine: a sparse, soft layer of black sprinkled over my cheeks.

Goldy’s the reason I’m here at Normal Prom in the first place. Kind of. A few months ago, I found this notebook behind a bookshelf in his room. A journal from when he was at rehab. It was a real mess, kind of like his approach to life: unorganized, completely unfettered by consequences, reaping all the benefits.

I flip through the notebook, hoping something insightful will suddenly come tumbling out. But it’s the same as when I first found it. Inside is pure chaos: some journal entries, blank pages, doodles, artwork, random poems, words in large letters. My eyes land on the word rahao, which I learned about at Khalsa School. It means to pause and think deeply about the central message of a shabad—a sacred musical poetic composition. On a blank page after all his gibberish, I’ve written out a heading for a new list: Sunny G’s Series of Rash Decisions.

It comes right after Goldy’s final almost-entry: Goldy’s List of Ways to Be a Better Dude. Dated a few days before he died. But no actual list accompanies it. Just blank pages upon blank pages, a sea of nothingness. The finality of the blank pages kind of freaked me out. That’s why I started the rash decisions list.

No more obedient Sunny G who does whatever everyone tells him to do. Time for Sunny to make reckless life choices.

The first and so far only entries in my rash decisions notebook:

Add it on Goodreads here!

May is Asian American & Pacific Islander Month. Here are our reading recommendations for your list!