See the cover of SEASPARROW by Kristin Cashore

Today we’re revealing the cover for Seasparrow by Kristin Cashore and sharing an exclusive interview on what’s next! The fifth novel in the bestselling Graceling Realm series is told from the point of view of Hava, Queen Bitterblue’s sister and spy, and chronicles the harrowing journey back to Monsea.

Hava sails across the sea toward Monsea with her sister, the royal entourage, and the world’s only copies of the formulas for the zilfium weapon she saved at the end of Winterkeep. During the crossing, Hava makes an unexpected discovery about one of the ship’s crew, but before she can unravel the mystery, storms drive their ship off course, wrecking them in the ice far north of the Royal Continent. The survivors must endure a harrowing trek across the ice to make it back to Monsea. And while Queen Bitterblue grapples with how to carry the responsibility of a weapon that will change the world, Hava has a few more mysteries to solve —and a decision to make about who she wants to be in the new world Bitterblue will build.

Scroll down to see the cover and read an interview with Kristin Cashore! 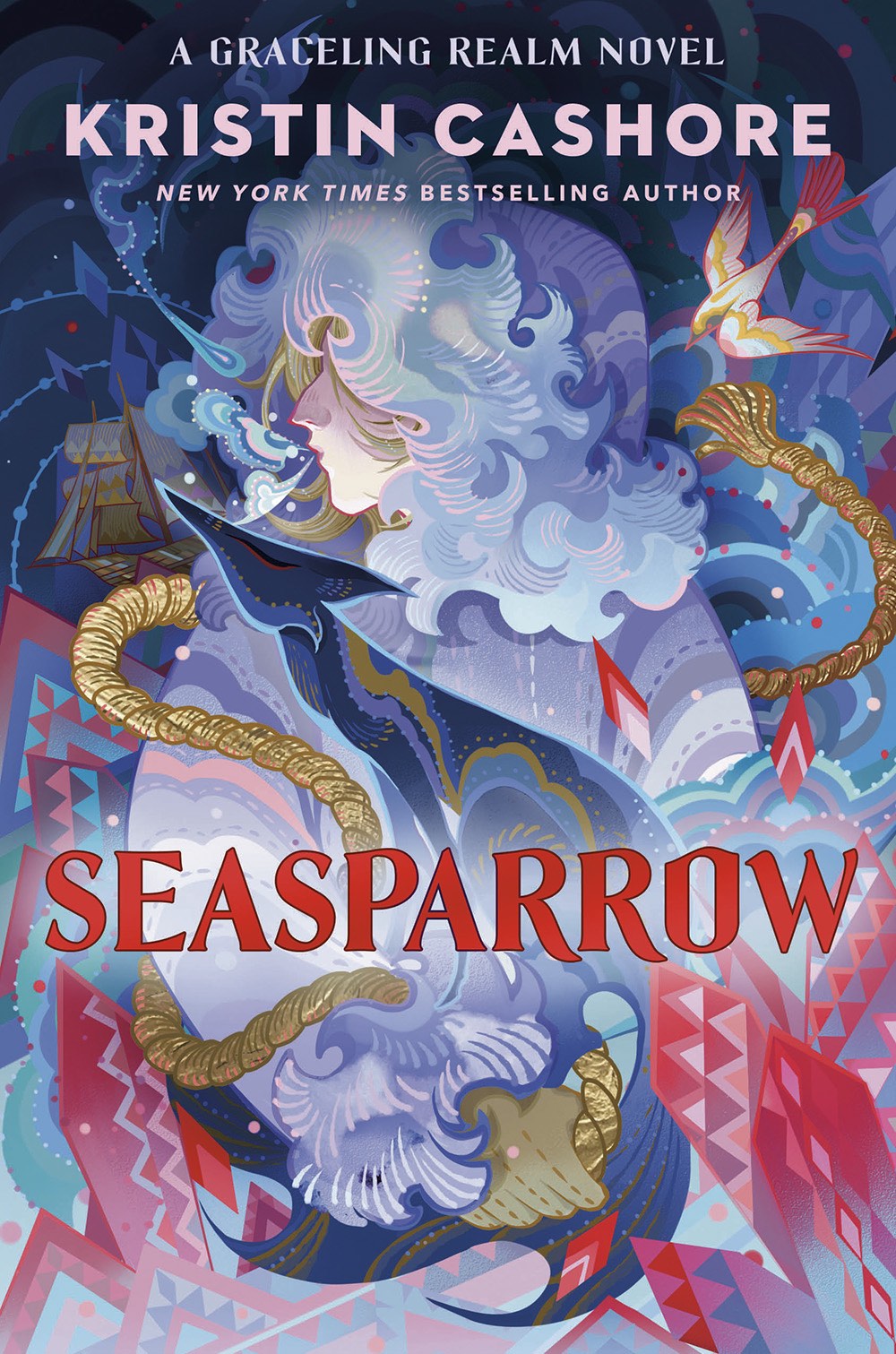 Andrew Karre, executive editor at Dutton: Hi Kristin! Seasparrow is the first book we’ve worked on together, but of course it’s your sixth novel and the fifth Graceling Realm book. One of the things I did in preparation to work with you was read the first four Graceling titles in a row over the course of a month or so, and what struck me was how much larger the known world of the realm has become since Graceling in 2008–and in a way that seemed very intentional. Every book in the series has grown the world in some way, often quite explicitly and dramatically. There’s an unbroken thread of exploration (intentional and accidental) from Graceling to this latest book, and it makes me wonder: is that a reflection of what it’s like for your to start work on a new Graceling book? Does it feel like exploration and discovery?

Kristin Cashore: Hi Andrew! It’s been wonderful, from beginning to end, to work on Seasparrow with you. Absolutely, each new Graceling Realm book is a journey of exploration and discovery for me. Each decision to expand the geography of my world has also been an intentional attempt to free myself from some of the ways I limited myself (unconsciously and unintentionally)  in the writing of the prior books. Every book a writer writes involves hundreds of specific and particular decisions made for the purposes of furthering that book — how the government works, for example; what the landscape looks like; what the people look like; how the magic works. But those same choices that give you the freedom to do what you want to do in that book can often present limitations when you’re starting the next book! Part of the reason I’ve expanded my world is so that I can play with different kinds of political landscapes, new forms of technology, and more diversity of characters — just to give a few examples. And with every single page, I’m reaching out in the dark, trying to figure out what’s there and what to do with it. Writing these books has involved constant discovery!

AK: Part of why I ask this, you can probably guess, is because I know you spent a significant amount of time on an unfamiliar vessel exploring an unfamiliar part of our mundane world in preparation for the new book. Can you tell us a little about that?

KC: I love to talk about this. In October 2018, I spent two + weeks doing an artist residency on a tall ship in the Arctic Ocean, sailing around Svalbard. Every day, we made progress around the island’s northwest corner, and every day, we got to spend some time on land. It was a landscape of glaciers and icebergs, treeless stretches of ice, whales, walruses, arctic foxes, polar bear prints in the snow. I approached the residency knowing that I wanted to write a book about Hava — then discovered, in the Arctic, what a perfect setting it was for her. Hava is a bit of a loner. She has a pretty stark view of the world. She has the ability to change what you think you see when you look at her — which means, she’s an expert at hiding. There are so many places to hide on a ship! But not a lot of places to hide on a barren stretch of ice. I decided to send Hava on an adventure that would give her a chance she’s never really had before to think about what she wants, who she wants to be in the world — and whether there might be some benefits to stepping out of the shadows and into the light now and then.

AK: Another thread the new book picks up from all its predecessors and develops is a sense of wonder about how the world works—scientifically, politically, socially, linguistically, magically. From humans to blues foxes, the books often show individuals struggling both with gaps in their knowledge and with engrained—but perhaps very faulty—ideas about how things are supposed to work. For example, I often think about a particular moment in Seasparrow where Adventure, the blue fox readers will remember from Winterkeep, decides to think differently about “the secrets of foxkind”: “Blue foxes are different on the Royal Continent. That’s what we’ll say, and people will believe us.” And Adventure is by no means the only character trying to remake or reform a world in this book. As someone who works with authors all day, it often looks to me like your characters are revising the world you’ve made for them. Does it feel that way to you?

KC: This question makes me emotional, because what you describe is what I want for my characters, and it’s also what I want for all of us in the world. To be able to reform our world, even when it seems like the limitations we’ve created for ourselves make change impossible. I’m often struck by the parallels between writing and life. To return to writing specifically, I do think you’ve hit on something there — my characters teach me how to revise their world. They’re the ones who come to me with their feelings and their needs. It’s up to me to find the solutions that will ease their pains, and my characters are very real to me, so I’m generally very motivated to do that.

AK:  And finally, I’m always curious about books, movies, music, and art that affected or inspired an author while writing. Are there any you can share for Seasparrow?

KC: This is a fascinating question, because with most books, I have a lot of influences to share. But I’m realizing, now that you’ve asked, how much interiority there is to Hava, and how much of my writing — and my thinking about the writing — took place inside Hava’s head. Hava has stories of her own, and those were the stories I was dwelling inside. I wonder if I’m coming up short with creative influences because Hava is such a lonely and isolated person? And an introspective person? The one exception is survival stories. I read a lot of those! I’ll name just a few: In the Kingdom of Ice by Hampton Sides; Island of the Lost and In the Wake of Madness by Joan Druett; The Ice Balloon by Alec Wilkinson; Shipwreck at the Bottom of the World by Jennifer Armstrong; Scurvy by Stephen R. Bown; Alive: the Story of the Andes Survivors by Piers Paul Read. I was looking for likely stories, but I was also studying how to convey the intensity of the survival experience. It involved a lot of reading very grim stuff while paying attention to how it was making me feel. Then trying to figure out why it made me feel that way, so that I could re-create that feeling for my readers in my own story.

For more info on the Graceling Realm series, click here!

And to read more about Graceling Book 1, click here 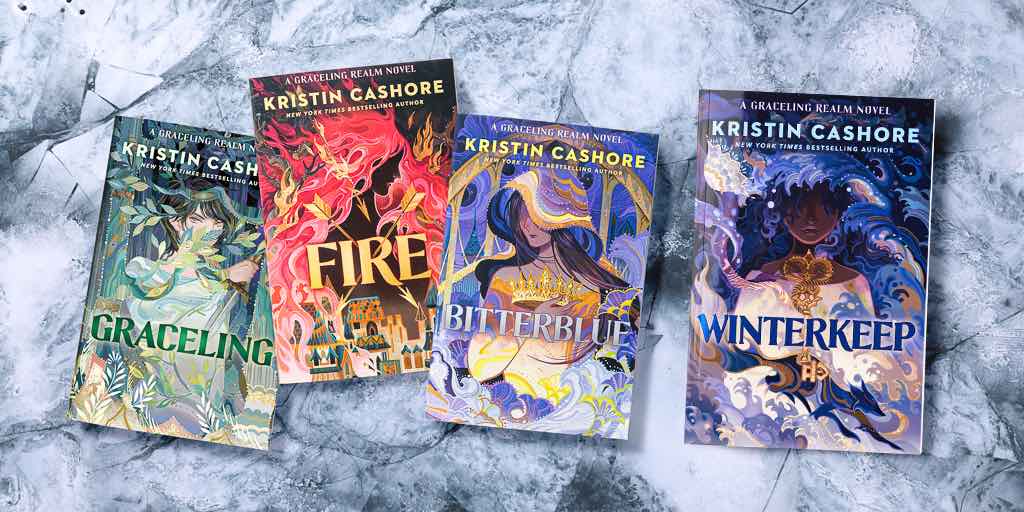