What it’s like to watch your book become a movie: Stephanie Perkins talks about There’s Someone Inside Your House on Netflix!

What is it like to watch your book become a movie? We asked Stephanie Perkins, whose There’s Someone Inside Your House just hit Netflix! Here’s what she had to say.

Hi, there! I’m Stephanie Perkins, and I’m the author of the new horror novel The Woods Are Always Watching—but today I’m here for my previous novel, There’s Someone Inside Your House, which was recently adapted into a feature film for Netflix.

It’s difficult to make a movie. Extremely difficult. There are so many people involved, and so much money at stake, and an endless number of ways that it can all fall apart.

So even though a producer had been telling me for months that it was happening, even though I had read the screenplay, even though a director was attached, even though the film was cast, I still didn’t believe the adaptation was real until that same producer called me from the middle of a cornfield and told me they were six days away from shooting.

Only a few weeks later, my husband, my literary agent, and I were standing in the middle of that same cornfield. 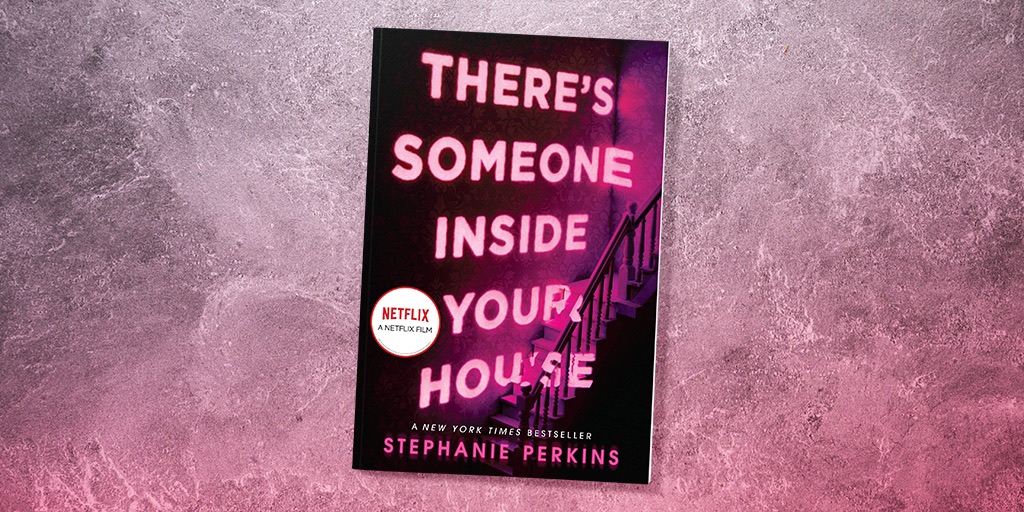 A few random memories, as they occur to me:

• We visited the set for two nights and watched the filming of several creepy scenes, but the very first scene we saw was romantic—which felt satisfyingly on-brand, since my most well known novel is still Anna and the French Kiss!

• The cornfield was sectioned off into different quadrants that were used for different purposes—a romantic scene here, a fire there, a maze entrance here, etc. I am far too shy (and too much of a rule-follower) to have ventured into the corn maze on my own, but—in true high school, peer-pressure form—the actors playing the football bros encouraged us to go inside and explore. I’m so glad they did! Thank you, football bros.

• You know those special chairs that directors and actors and producers have with their names written on the back? They had one waiting for me. I was floored. It was such a thoughtful and welcoming gesture.

• There were just . . . so many people. The crew on a production like this is enormous. It was strange and wonderful to see how BIG my story had gotten, and how many people were now involved in it. Beyond surreal.

• Without exception, the actors were all incredibly kind. Multiple crew members told me that on sets, actors (especially younger actors) tend to model the behavior of whichever actor is first on the call sheet. This actor was Sydney Park, of course, and the crew had nothing but glowing praise for her. Her professional, positive energy was felt everywhere.

• Because I was there at night, I don’t have many photographs from my time on set. But my favorite is the one that I’ll never be able to share publicly, because it’s me and the killer, fully unmasked, with huge smiles on our faces.

• Post-production, I’ve had conversations with so many people involved in this project—director, screenwriter, producers, cast—who have told me that lifelong friendships were forged during the making of this film. I can’t think of any greater praise or reward. If that’s my movie’s legacy, it’s one that I’ll always be proud of.

Click here for more info on There’s Someone Inside Your House!