All My Rage Transformed My Idea of the American Dream

All My Rage is a powerful, heart-wrenching, and ultimately uplifting contemporary novel from Sabaa Tahir, on shelves now. We asked Samawia Akhter, a BookToker and superfan of the book, to share about the impact that All My Rage had on her. Keep scrolling to see what Samawia said!

Sabaa Tahir’s All My Rage comprises the personal struggle of accepting one’s familial and cultural roots, being proud of one’s identity, and making sacrifices to achieve the American dream. The novel is an impressive and utterly personal story taking the reader through a journey of grief, love, betrayal, and forgiveness. While anyone who reads this book can empathize with the characters, I personally saw myself and my culture represented in such a profound way, that I could not help but see myself in the pages, envisioning the aspects of the story through the eyes of a Pakistani-American teenager, like two of the main characters, Noor and Salahudin.

Reading All My Rage evoked emotions in me that were completely unexpected. After reading the summary, I knew I would be able to relate to it deeply, as I am a Pakistani-American teenager like the characters. However, I never expected to have teary eyes throughout the entirety of reading the novel because of how much it resonated with me. The Punjabi written within dialogue and narration throughout the book struck a part deep within me that recognized that language as mine. In addition to being American and Pakistani, more specifically, I am Punjabi, as my parents are from a small village about five hours away from the city of Lahore, where Salahudin’s parents resided before they immigrated to America. Having never read a book that was so very specific to my Pakistani Punjabi culture, in addition to being a child of immigrants in America, I was caught off guard, to say the least.

Both Noor and Salahudin are searching for a connection to this place they both recognize as home, but must also come to terms with accepting their American identity, something I can relate to deeply. I call this struggle “the battle of the hyphen”: being Pakistani-American, and having a hyphen connecting the two parts of you because they can never intertwine. Life in America is so intrinsically different than it is in Pakistan, so it has always seemed impossible for my identities to coincide.

Having recently visited Pakistan, I am now more aware than ever of this divide. My time in Pakistan was pleasant, visiting family I had not seen for six years, enjoying the food and culture, and simply being in a place surrounded by people who look like me. It is known that taste is associated with memory. So, whenever I think of any of my favorite foods from Pakistan, I cannot help but visualize the memory associated with that food as well.

One of my favorite snacks I had in Pakistan are samosas. In our village, there is a man who owns a snack stand a street down from my family home, and he makes the best samosas. A samosa is a fried pastry, usually filled with potatoes or meat, that is folded into a triangle shape. I prefer potato-filled samosas, and this man makes them perfectly and authentically in a way that cannot be replicated anywhere in America. He had owned that stand the first time I visited Pakistan as a six-year-old, thirteen years ago, and still diligently works at it today. In the village, everyone knows everyone, and they all appreciate him. Another food I enjoyed in Pakistan was gol guppay as we call them in Punjab, or pani puri, as they are known everywhere else. Gol guppay are bite sized snacks that feature a hollow, crispy, puffed-up ball, with a filling on the inside consisting of potato, chickpeas, onions, spices, and tamarind or mint flavored water. This is my other favorite Pakistani food because whenever I think of gol gapay, I think of bazaar trips on rickshas, shopping at the stalls with my aunt and cousins, hearing the lull of Punjabi voices around me, then after hours of walking around, stopping at a gol gappay stand, and then competing with my cousins as to who can finish theirs the fastest.

My memories radiate laughter and happiness. Salahudin’s reminiscence of visiting Pakistan was similar, in a scene where he says to Noor:

“I miss it.” Salahudin said that day. “Even though I only visited once.”

“What do you remember?”

“I remember Ama with this barrel of iced mangoes. They were cutting them open and juice was dripping and everyone was laughing. I remember missing you. Wishing you were there.”

Noor’s final reply to Salahudin struck me deeply: “Pakistan lives in the blood” (Tahir 136). While this is something that may seem obvious at first sight, having Pakistani genes, at a closer look, it is a deeply profound statement, highlighting not only the closeness with Pakistani culture, but also a coping mechanism.

For many immigrants and children of immigrants, only immediate family live with them in America. Our entire extended family, grandparents, uncles, aunts, cousins, etc., often live overseas in our ethnic land, and so we must live our lives here without any of them by our sides. Therefore, whenever we have the chance to visit, we cherish our time with our family. Many who are not aware of the immigrant or first-generation struggle, do not comprehend everything that immigrants sacrifice when they come to America. When my parents immigrated here, they left everything and everyone behind, just as Salahudin’s parents did, and just as almost every South Asian immigrant couple I know of did. They came here for “a better life,” but the trade they made for opportunity was being subjected to racism, Islamophobia, xenophobia, and more here in the U.S. It is confusing to love a country that sees you as “other” when you were born and raised here. 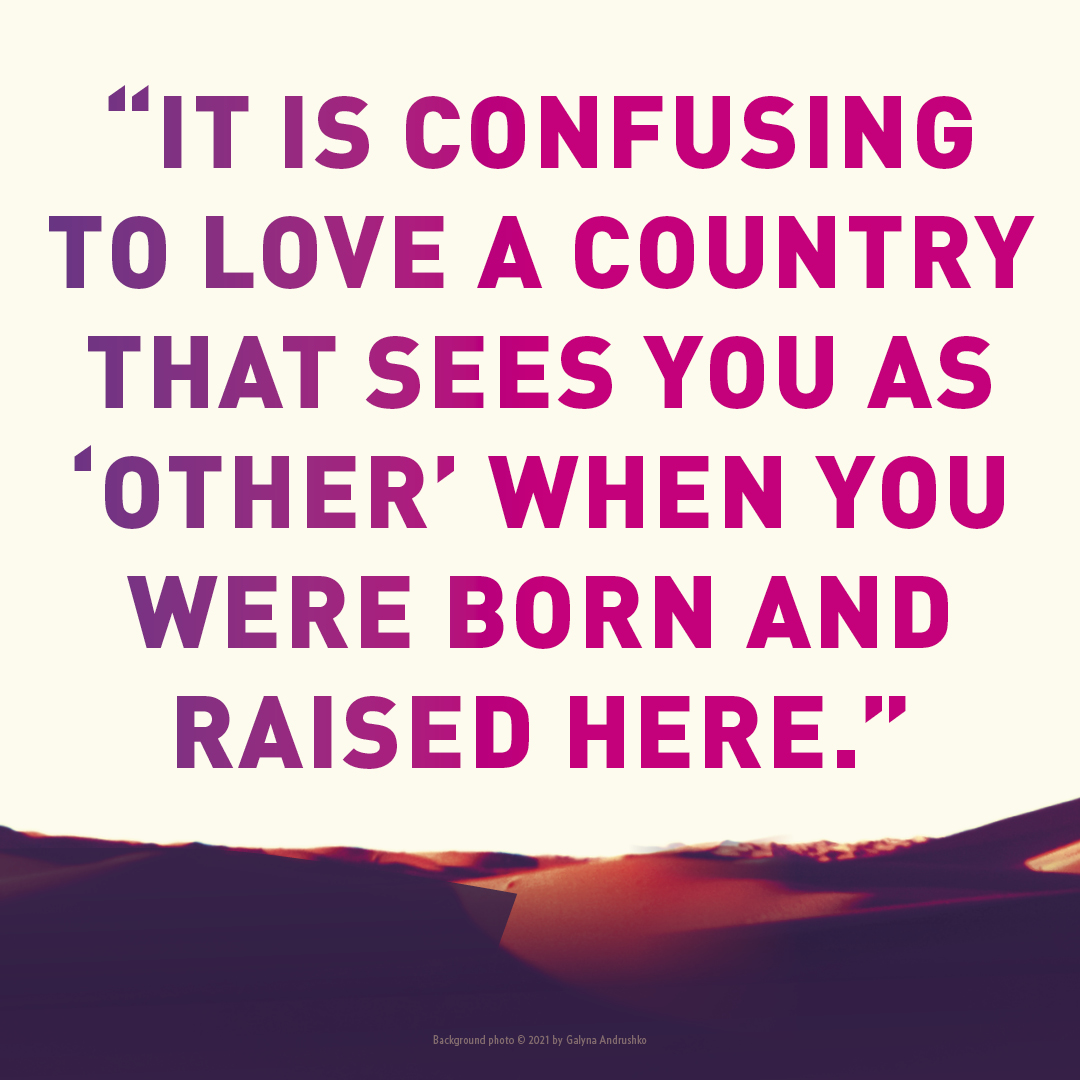 Ironically, when visiting Pakistan, I also felt like the “other” because I speak Urdu, the generally known language of Pakistan, well enough for an “American hyphen” kid, but I struggle more with Punjabi, my ethnic language, and it is so hard to be seen as “the American, white-washed teenager” whenever I visit. It is difficult to hear these stories of your grandparents that you never knew. It is hard to be asked “Would you live in Pakistan, if you could?” and want to answer with an immediate no because albeit America has its issues, it is the home I am familiar with. It feels like betrayal. Everything feels like betrayal: sometimes shying away from wearing my ethnic clothes, using a whitewashed version of my name so others can pronounce it, or purposefully choosing to take a salad for lunch instead of biryani so I do not get stares. I am other here, and I am other there. Do I belong anywhere? I can never be American enough, nor Pakistani enough to please those around me, and I think that is one of the main themes Tahir tackles perfectly in All My Rage.

While addressing the racism and Islamophobia that Pakistani immigrants face, Tahir also captures the struggle of identity through Noor and Salahudin’s experiences. Both characters reside in America, but still grapple for a lifeline to Pakistan and yearn for the connection that others have to it. More specifically, they fear how their culture will live on without those who secure them to it. Toward the beginning of the novel, Salahudin specifically thinks about how “One day my ama will die. Everything that she ever was will die with her. The way she walked quickly, and flour in her hair when she made roti. The lines in her forehead when she yelled at me for doing something stupid. Her Saturday morning parathas and her smell, cardamon and Pine-Sol and lotion” (Tahir 64). While he addresses the general fear that most have of losing their mothers, Salahudin also exposes his fear of losing the tether to his culture that is her. I personally relate to this fear, considering my mother is the one who knows the recipes of my cultural foods, knows the language down to her bones, and will forever have a connection to the land of my forefathers that I lack. Tahir addresses this unanimous fear that immigrant children share and uses it as a driving force for the rest of the novel. 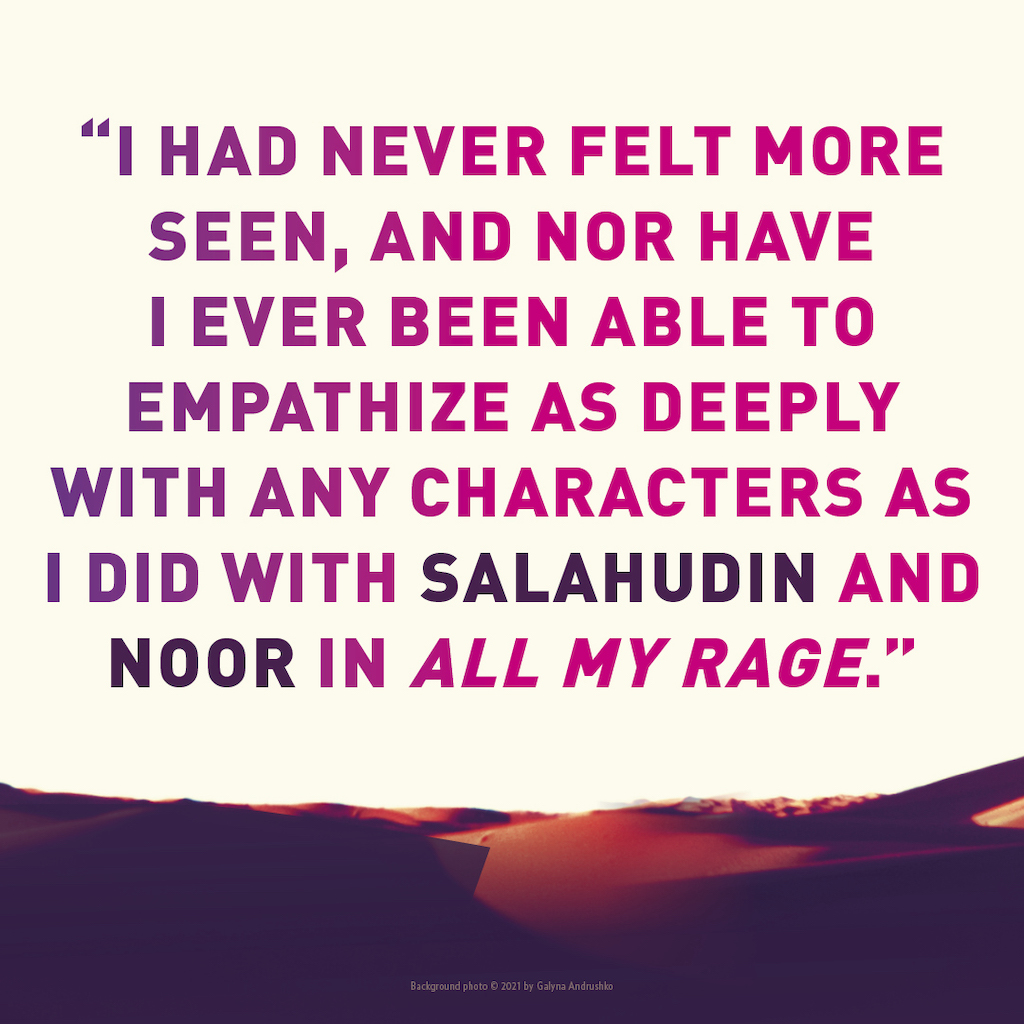 All My Rage confronts the truth of the Pakistani-American struggle. The main characters reflect the millions of teenagers who go through similar difficulties of coming to terms with their identity. Many, like myself, question if we can truly belong anywhere, considering we are a blend of two opposing cultures. Sabaa Tahir takes the reader through this struggle, forcing them to empathize, and brings out matters that are usually shoved under the rug.  In many ways, therefore, it is not just a reflection, but an exposé on “The American Dream.” While I have read works that take on this idea, All My Rage is unique in that it presented it from the point of view of American-Pakistani teenagers, who are like myself.

Reading a novel that is so specific to my Pakistani Punjabi culture was in many ways shocking as much as it was comforting because I had never felt more seen, and nor have I ever been able to empathize as deeply with any characters as I did with Salahudin and Noor in All My Rage. The blatant depiction of Islamophobia broke my heart, as I have thankfully never had to deal with this issue as harshly as Noor and Salahudin did. However, it painted a realistic picture that is overlooked by many, and made me feel for my fellow Muslim-Americans who live through this reality every day.

All My Rage confirmed my hope that while the reality of the American Dream is not the utopian vision many of us desire, and many things can be taken away from us, no one can take our ability to love and find peace, because that is something we can only find within ourselves.

Samawia Akhter is a Pakistani-American Muslim, born and raised in Wisconsin. She is currently a freshman in college, studying psychology. She has been passionate about reading since she was young, and now shares her love of books as a BookToker and Bookstagrammer. Follow her on social at: http://beacons.ai/samawia.