Cover reveal! A Crooked Mark by Linda Kao is a dark and sinister debut YA novel about a teen boy who must hunt down those marked by the devil – including the girl he has fallen for. Coming June 20, 2023!

Rae Winter should be dead.

Some say that walking away from the car crash that killed her dad is a miracle, but seventeen-year-old Matthew Watts knows that the forces of Good aren’t the only ones at work. The devil, Lucifer himself, can mark a soul about to pass on, sending them back to the land of the living to carry out his evil will.

Matt has grown up skipping from town to town alongside his father hunting anyone who has this mark. They have one purpose: Find these people, and exterminate them.

After helping his father for years, Matt takes on his own mission: Rae Winter, miracle survivor. But when Matt starts to fall for Rae, to make friends for the first time in his life, he’s not sure who or what to believe anymore. How can someone like Rae, someone who is thoughtful and smart and kind, be an agent of the devil? With the lines of reality and fantasy, myth and paranoia blurred, Matt confronts an awful truth….

“The devil’s finest trick is to persuade you that

he does not exist.”

I don’t know how it feels when the Devil scratches a soul. My father says He must have the lightest touch, because no one ever notices His crooked claw leave a stain on something that should belong only to them. They smile their old smiles, crack the same jokes, eat and play and work and laugh just as they used to, but the Mark festers inside, growing and feeding like a parasite. By the time anyone notices something is wrong, it’s too late. Lucifer has already won.

I brace myself in the passenger seat as the car bounces down the moonlit road. Dad killed the headlights a mile back, and if we hadn’t driven this way hundreds of times before, we would have run straight into a tree by now. Yet nine months of careful work have given us plenty of hours to prepare. By the time we finished documenting sweet Mrs. Polly’s chilling descent from lucky survivor of a restaurant explosion to heartless killer Marked by Lucifer, Dad had it all planned out.

The matches sit in the console between us.

My mouth turns sour as my stomach gives another heave, and I clamp my teeth together, waiting for it to pass. Nine months of getting to know someone has a way of bleeding into an accidental friendship, making an already impossible job even harder. In the dim light, the determined line of Dad’s jaw holds only cold certainty, but doubt shrieks at me like a knife on glass.

It’s not easy to judge a soul.

I have to give Lucifer credit. There might not be any serpent in the tree or horned man with a pitchfork, but He’s still bang­ing on our door. He’s just gotten a lot more creative. Clever bastard found a brand-new way to wreak havoc in the human world.

The semitruck bearing down on your car. The train you think you can beat across the tracks. The safety harness that snaps halfway up the mountain. One moment you’re in this world, and then—

There’s a split second, however, when you aren’t quite in either. You’re right in the middle of the jump, eyes squeezed shut and both feet in the air, so you never see Lucifer extend a slender finger. It’s a delicate scrape, the smallest Mark on your soul, and then He sends you back. You’re alive, and everyone calls it a miracle, but God had nothing to do with it.

It’s something much, much worse.

Of course, not everyone who survives an accident is Marked. Some people really do get lucky, but you can never tell the difference just by looking at them. The Marked appear as normal as you or me, and that jump from this world to the next makes anyone fair game. A life filled with kindness and charity offers no protection. No shield. If Lucifer feels like leaving His couch at the moment you ski into a tree, all bets are off, and no one knows whether luck or the Devil saved you in that second you nearly died.

I’m still not certain which saved Mrs. Polly. But Dad is.

The house comes into view—a modest cottage on the iso­lated road, the familiar porch swing motionless in the shadows. Blackness bleeds from sleeping windows, and the single light beside her door offers the only glow in the surrounding dark­ness. Dad turns off the engine, and silence falls like the thud of a gavel.

“Maybe we should give it more time.” I brace against the frown growing on Dad’s face. “Just to be sure. She volunteered at the animal shelter yesterday—”

“And the sign over the door fell and crushed Jessa Barney’s skull twenty minutes after she yelled at Mrs. Polly for driv­ing too fast in the parking lot,” Dad finished. “If we had acted sooner, Jessa would still be alive.” 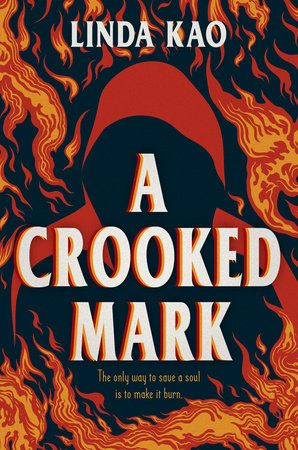