In a world where the children of the gods inherit their powers, a descendant of the Greek Fates must solve a series of impossible murders to save her sisters, her soulmate, and her city. Get ready for Threads That Bind by Kika Hatzopoulou, coming June 13, 2023!

Scroll down to see the cover and read more about the book!

Descendants of the Fates are always born in threes: one to weave, one to draw, and one to cut the threads that connect people to the things they love and to life itself. The Ora sisters are no exception. Io, the youngest, uses her Fate-born abilities as a private investigator in the half-sunken city of Alante.

But her latest job leads her to a horrific discovery: somebody is abducting women, maiming their life-threads, and setting the resulting wraiths loose in the city to kill. To find the culprit, she must work alongside Edei Rhuna, the right hand of the infamous Mob Queen—and the boy with whom she shares a rare fate-thread linking them as soul mates before they’ve even met.

But the investigation turns personal when Io’s estranged oldest sister turns up on the arm of her best suspect. Amid unveiled secrets from her past and her growing feelings for Edei, Io must follow clues through the city’s darkest corners and unearth a conspiracy that involves some of the city’s most powerful players—before destruction comes to her own doorstep. 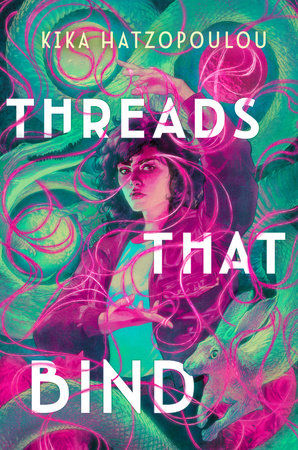