Read an Excerpt from Let’s Go Swimming on Doomsday

Natalie C. Anderson, author of City of Saints & Thieves is back with an unflinching tale of sacrifice, hope, and redemption, Let’s Go Swimming on Doomsday. It goes like this:

When Abdi’s family is kidnapped, he’s forced to do the unthinkable, become a child soldier with the ruthless jihadi group Al Shabaab. In order to save the lives of those he loves, and earn their freedom, Abdi agrees to be embedded as a spy within the militia’s ranks and to send dispatches on their plans to the Americans. If Abdi’s duplicity is discovered, he will be killed.

He only escapes after he is forced into a suicide bomber’s vest, which left him with stumps where two of his fingers used to be and his brother near death. But everything changes when Abdi’s picked up for a petty theft, which sets into motion a chain reaction that forces him to reckon with a past he’s been trying to forget. 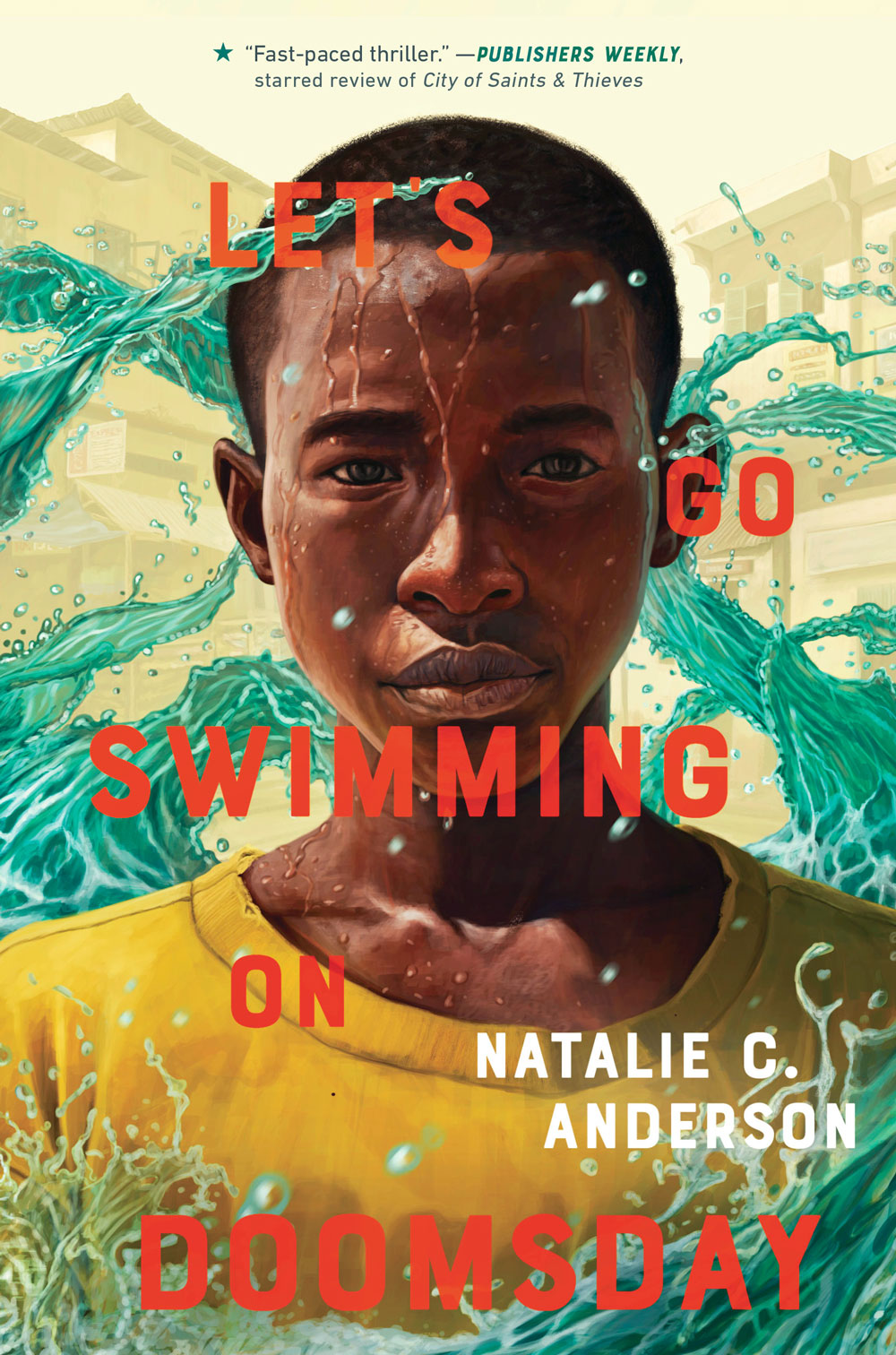 If you can’t wait to read more, scroll down for a special excerpt from Let’s Go Swimming on Doomsday!

I open my eyes and for a second they sting, and then nothing. I look around. Underneath me the ﬂoor of the ocean swells up pale and solid. Above, the sun is broken on the water’s surface into a million shining pieces.

By now I can hold my breath for almost two minutes if I’m relaxed like this. I’ve carried a stone in from the shore, and the weight is perfect. It anchors me, and I am very still. Fish like slivers of glass sail by, too small for eating. Through the drone of water in my ears I can hear a crackling noise that my father once told me was the sound of tiny shrimp breathing. A jellyﬁsh rides the current.

I think I’d like to be a jellyﬁsh. This is what it would feel like to be brainless and transparent.

One minute and ﬁfteen seconds. My vision is starting to pulse. I can feel my blood surging in my temples, telling me to breathe.

One minute and thirty-eight seconds. Lungs burning, something animal in me screaming, Decide! Live or die!

I look up at the shards of sun and tell it, Not yet. I want to live, of course I do, but it’s so tempting to stay. As soon as I break for air, there’s no pretending to be anything other than a boy who must swim back and put his feet on the ground. A boy who will feel his weight again, surprisingly heavy on his bones.

For as long as I can, I resist. Two minutes and four seconds. I don’t want to be the boy who will walk out of the waves, water sluicing down his black arms, falling from his white ﬁn-gertips. That boy will walk past the ﬁshermen’s boats, past the ﬁshermen. He’ll walk from the beach onto the tarmac. He’ll pass old, shattered buildings that remind him of dogs’ incisors. He’ll pass new buildings wrapped in scaffolding like ugly gifts. He’ll disappear into Somalia’s capital city, the White Pearl: Mogadishu.

My head breaks the surface and I gasp. Air and water sting my throat.

I tell myself I’ve chosen to live, but the water knows the truth. Waves brush my arms, soft as shroud linen.

The water knows I have to die.

By the time I get back to the hotel, I am completely dry.

“Where have you been?” Commander Rashid says, closing the distance in two big strides and grabbing me by the collar. The others look at me from the ﬂoor, eyes shining in the gloom.

“Swimming,” I say, pointing toward the water. “Just swimming, sir.”

“Swimming?” His eyes bulge. “Swimming? What do you think this is, a holiday?”

I am not sorry.

He looks me over, and I can tell he’s searching for signs that I’m cracking. Or that I’m having second thoughts, or that I’ve done the unthinkable and sold him and the Boys out.

“I needed to bathe,” I tell him. “Like a . . .” I pretend to search for the word, even though I’ve thought long and hard about what to tell him. “A puriﬁcation.”

Commander Rashid’s voice is low and soft—a knife glinting in the dark. “That was a long bath, boy. Hakim Doctor has faith in you, but if it were up to me . . .”

He’s interrupted by Bashir jumping up from the ﬂoor. “Commander,” he says, “I apologize, but can I please have your assistance with these connections? I’m not sure if the wires go here or to the other panel.” He holds up a tangle of plastic and metal to demonstrate.

Rashid makes a strangled noise and lets me go. “Not that one, doqon! Do you want to kill us all now?”

The commander should know that Bashir could make a bomb out of two mangoes and a shoestring, but my friend’s ruse is lost on him. Maybe we’re all just that tightly wound right now. Bashir winks at me over the commander’s head and I creep away, slip into the adjoining room of the half-built hotel. It’s empty except for my brother, who is lying on the ﬂoor. One whole corner of the room is gone, like something has taken an enormous bite out of it. A mortar, probably. A hot breeze rummages through the rooms, but the smell coming off Khalid is still heavy and foul.

I pick up the bottle of water and tip it into his mouth. I try not to gag. Is it the smell or my guilt that makes me want to throw up? “How are you?” I ask.

“Fine,” he grunts, after taking barely a sip. “What do you think you’re doing, wandering off?” He’s trying to sound tough, but his voice is a rasp.

“Shh.” It barely even registers anymore when he calls me the new name. “Hakim Doctor said you aren’t supposed to talk. The stitches will open.”

The bandage across his stomach is a muddy red brown and needs changing, but we’re out of clean cloth. Only the Doctor would know for sure how bad the wound really is, but he’s not here. He gave Nur and Commander Rashid instructions over the phone and Nur stitched my brother up as best he could, but what Khalid really needs is a hospital, antibiotics. But he’s not getting any of that, not now that his face has been circulated across Mogadishu as a Most Wanted Jihadi.

Whether he lives or dies is all in God’s hands now, according to the Doctor. I get it: I know what would happen if we took him to the hospital. The doctors would turn him in for the money. I know that. But doing nothing is making me crazy. I try not to think what my mother would say if she saw me just sitting here watching him die.

If she knew that this was all my fault.

The soldier’s bullet didn’t hit where it was supposed to. Instead it sliced right through him, just under his ribs, tearing through his intestines, from the smell of it. “Septic,” I heard one of the guys whisper when he thought I couldn’t hear. I’m not sure if the shot really was an accident or intentional, but either way, looking at Khalid sweeps away all my remaining doubts about what I’m about to do.

My brother gurgles when he breathes, and his skin is the color of old canjeero bread. I pour a little water on a rag and wipe his face. He’s burning up.

“When do you leave?” Khalid asks.

“A couple of hours.”

He nods. It looks painful. He closes his eyes. “It should be me there, not you.”

“You should be here. Getting well, Inshallah.”

“I don’t want to be well,” he says very softly. His eyes stay closed. “It wasn’t supposed to happen this way.”

I don’t answer for a few seconds. I’m not sure which part he’s talking about, but it doesn’t matter. He’s right. None of it should have gone down like this.

But I don’t say that. Straining for sincerity, I say what I know will make him feel better. “It was God’s will.” I must be a good enough liar, or Khalid’s a good enough believer. The crease in his brow smooths.

I squeeze his shoulder gently, but I think he’s already asleep again. I wait until his breathing is regular. For a moment, he is Dahir again, just my big brother. Khalid the warrior fades away.

Commander Rashid is waiting for me. The thing he carries is bulky and awkward. Wires spring from it like insect legs. The commander’s mouth is a narrow, angry slash. He’s still watching me, still suspicious. But the Doctor has given his orders, and the commander will follow them.

He places it carefully in my arms and steps back. “Let’s see if it ﬁts.”

Curious about what else is coming to shelves this month? Checkout every book coming out in January!